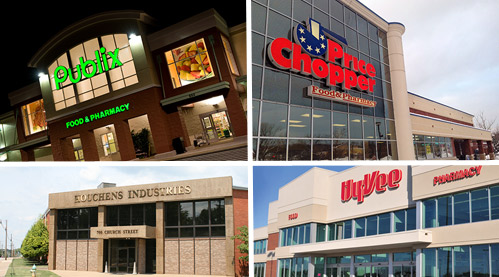 Opinions vary on whether firms that give their employees an ownership stake are more productive, more innovative workplaces, but the 10 organizations below have no qualms about answering that question with a resounding “Yes.” Here, then, the largest Employee Stock Ownership Plan (ESOP) companies. 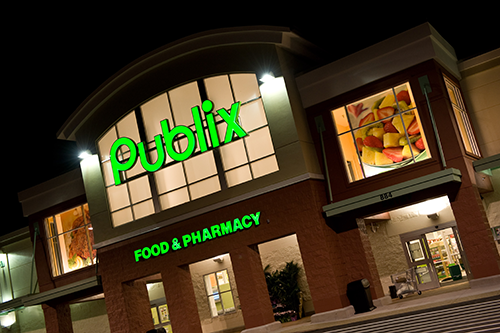 The largest employee-owned firm in America is Florida-based grocer Publix. The supermarket is also the 7th largest private firm in America with $27.5 billion in sales, yet it manages to run a smooth and growing operation with an employee-owned fund controlling 80 percent of the company. Since inception, its closely-held stock has risen more than 19 percent per year, twice as fast as the S&P 500 index. Publix ranks among the “100 Best Companies to Work for in America.”

Founded in Winter Haven, Florida in 1930 by George W Jenkins, the chain now operates 1,080 retail food and employs about 167,000 people in supermarkets throughout Florida, Georgia, South Carolina, Alabama and Tennessee, and is expanding into its first new state in 10 years, North Carolina.

Hy-Vee, founded in 1930 by Charles Hyde and David Vredenburg in Beaconsfield, Iowa has grown into an employee-owned chain of 235 supermarkets, with 56,000 employee owners. It is located throughout the Midwest United States in Iowa, Illinois, Kansas, Minnesota, Missouri, Nebraska, South Dakota and Wisconsin.

Since its founding, Hy-Vee stores have operated autonomously, choosing their own inventories and setting their own prices. Store managers (now referred to as store directors) were then, and still are today, encouraged to test new ideas. One of the first such entrepreneurial concepts – employee bonuses – was introduced in 1936 and endures to this day. That first Iowa store grew to become Hy-Vee – a company known for excellent service and reasonable prices. With sales of more than $8 billion, Hy-Vee now ranks among the top 25 supermarket chains and the top 50 private companies in the United States. 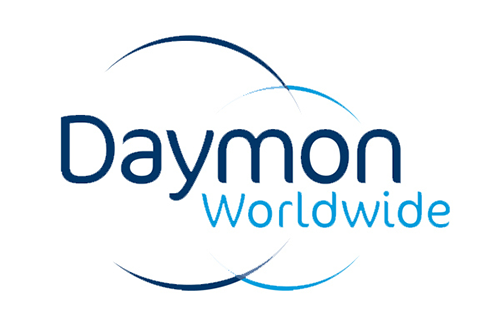 On July 5, 1970 Peter Damon Schwartz and Milt Sender shook hands on a partnership deal that produced Daymon Associates, Inc. in New York City. Their goal was to maximize the market potential of Private Brand products, which in 1970, were rarely marketed to attract consumers, suggest quality or differentiate one retailer from another.

The company name was a take on Peter’s middle name, and the partnership formed the basis of what has become the leading full-service global Private Brand and Consumer Interactions company, with 36,000 associates working at over 200 offices in more than 49 countries on six continents. 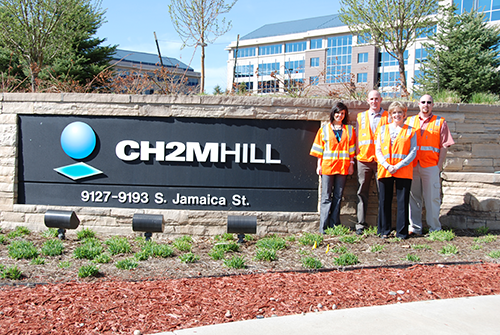 CH2M HILL, with 30,000 employee owners, is an American engineering company that provides consulting, design, construction, and operations services for corporations, and federal, state, and local governments. The company was founded in 1946, but the idea for the firm started in 1930 by three Oregon State College students—Holly Cornell, James Howland and T. Burke Hayes—and their civil engineering professor/mentor, Fred Merryfield. After World War II, they recognized a need for qualified experienced engineers, and the firm was born. The company name was taken from the first initial of their last names. In 1971 they merged with Clair A. Hill & Associates of Redding, California—creating CH2M HILL.

By 2014, the firm had 28,000 employees operating from more than 170 area offices worldwide, and $7 billion gross revenues, including joint ventures (2012 year-end revenue). They have done work in 149 countries and on all 7 continents. 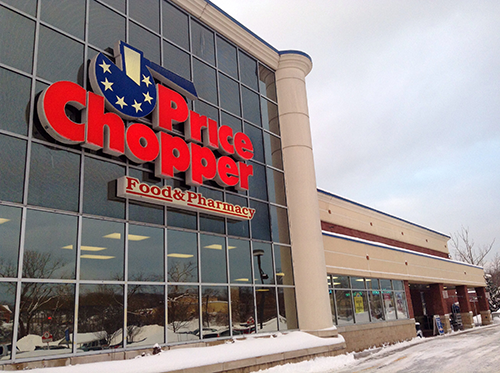 The Golub Corporation, parent company of Price Chopper Supermarkets, celebrated its 82nd anniversary this year. Its roots harken back to 1900, when Lewis (Leib) Golub arrived at Ellis Island from Russia and settled in Schenectady, New York, a large city on the Hudson River. With a mere 50 cents in his pocket and a desire for his own piece of the American Dream, Lewis opened a lunch room, dairy store and eventually a wholesale grocery warehouse in 1922. Shortly before his death in 1930, Golub Wholesale Foods merged with another wholesaler, so that Lewis’ two sons, Bernard (Ben) and William (Bill), who had grown up in the business, would be part of a larger and stronger company.

The brothers Golub continually brought innovative ideas to market. In 1972, in response to the struggling economy, the first “Price Chopper”, an experimental store focused on the ‘high quality, low price’ concept was opened in Pittsfield, MA. Consumer reaction was so positive that by 1973, the entire chain was converted overnight to Price Chopper Supermarkets.

Today, the chain operates more than 130 stores in New York, Massachusetts, Vermont, Connecticut, Pennsylvania, and New Hampshire and is fueled by an extended family of more than 22,000 teammates who collectively own more than 47 percent of the company’s privately held stock, making it one of the nation’s largest privately held corporations that is predominantly employee-owned.

Lifetouch Inc., the world’s largest employee-owned photography company, began in 1936, when Bruce Reinecker and Eldon Rothgeb made plans to bring their “School Photography of Distinction” to one-room schoolhouses through rural Minnesota.  With $500 in start-up money, they set to work on a company they initially named National School Studios. In 1978, Lifetouch transferred 100 percent of the company’s ownership to its employees.

Today, Lifetouch and its subsidiaries serve the photographic needs of people of all ages, providing “memories for a lifetime.” The company, with 22,000 employee owners, runs about 700 photography studios located in J. C. Penney and Target stores nationwide, as well as some 15 stand-alone locations in half a dozen states 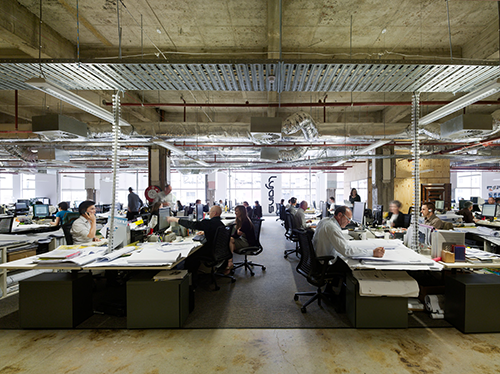 Prior to starting Penmac, Patti Penny gained extensive career experience in human resources, which led to the idea to start her own temp service. The original plan was simple—to open a small office that would supply temporary employees to the company her husband worked for, but the customer base soon expanded far beyond that.

During its first year of business, Penmac worked mostly with small clients within the community. Soon, Penmac landed two big accounts with General Electric and Reckitt Benckiser, formerly known as French’s Mustard. Patti’s once-small, single office business has exploded into 29 branch offices in eight states. In 2011, the company generated over 17 thousand W2 forms. Penmac has over 900 business clients, and 140 internal employees, including 34 corporate employees. In 2010, Patti and the Penny family transferred ownership of Penmac to its employees with an Employee Stock Ownership Plan. The company boasts 18,000 employee owners. 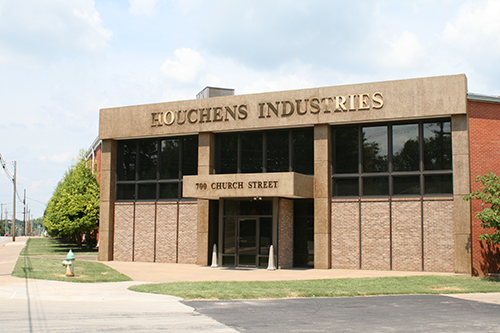 The largest 100 percent employee owned company, Houchen Industries was founded in rural Kentucky by one man, Ervin Houchens, in 1917. At first, it was a food store. Today, with 16,000 employee owners, it’s much more than that; Houchens is a diversified conglomerate doing business in almost every North American state and 30 plus countries.

It was in 1988 that the company was purchased by its employee owners. It has businesses in retail grocery and convenience stores, quick-to-serve restaurants, insurance, stock brokerage and financial services, construction, manufacturing, software and website development, property management and more. 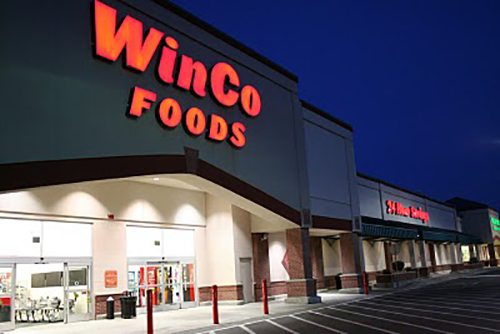 WinCo Foods began in 1967 when Ralph Ward and Bud Williams founded a discount warehouse grocery store in Boise, Idaho under the name of Waremart. The company operated stores under the names of Waremart Food Centers and Cub Foods until 1999 when it changed its storefront name and the corporate name to WinCo Foods, which stands for Winning Company.

WinCo now operates 94 employee owned stores in 8 states, with nearly 15,000 employees, and continues to grow by opening new stores and adding new members to the company every year. Unlike a publicly traded stock valued on the open market, the per-share value of WinCo’s stock is appraised annually by an independent valuation firm selected by the ESOP trustee. ESOP stock values have averaged increases of 20% compounded annually since 1985. That means an employee who received a company contribution of $5,000 worth of stock in 1985 now has stock worth almost $480,000 from that one year alone!

As a team, Alliance focuses exclusively on the niche manufacturing and industrial sectors, allowing us to more quickly understand the dynamics and trends in those spaces. Over the years, the Alliance has built deep industry resources, acumen and networks that are brought to bear with their portfolio companies.