No one starts a business or invents a product hoping to fail. But the truth of the matter is that most people do. With success rates for business and inventions incredibly low, it’s amazing that some of the world’s most popular products were accidentally invented. Let’s take a look at some of the most popular “happy accidents” in business and explore ways business students and prospective entrepreneurs can turn failure into success.

Percentage of businesses that fail within the first 18 months (1)

Failure doesn’t have to be the end. Sometimes it’s just the first step on the journey to success.

Brothers Dr. John Harvey and Will Keith Kellogg accidentally created corn flakes while trying to manage their vegetarian diet. Both Seventh-day Adventists, the two men worked for a sanitarium. One day, John left out some wheat and it went stale. When the two used it for baking anyway, they got flakes instead of dough. They then served it to the patients at the sanitarium and a patent soon followed. (1)

A soap machine that was inadvertently left on during lunch created a soap mixture that was “puffed-up and frothy.” It was still shipped and customers went crazy for the soap because it floated because of the air that had seeped into the mixture. (1)

3M chemist Spencer Silver’s attempt to make a strong adhesive instead resulted in a light adhesive that stuck to things but could be easily pulled off. Some years later, a colleague at 3M, Art Fry, approached Silver about using his invention to mark his place in a hymn book. (5)

Rejected three times by USC’s film school Spielberg has gone on to become one of the most celebrated and successful directors in movie history. (7)

As we’ve seen, rejection or a failed project doesn’t have to derail your ambitions. Here are some tips for turning what can be seen as failure into success.

Have a positive attitude; be optimistic.

Dissect the project — what worked and what didn’t.

Bounce back quickly (in other words, get right back on the horse).

“Success is not final, failure is not fatal: it is the courage to continue that counts.” 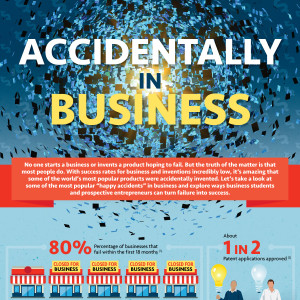